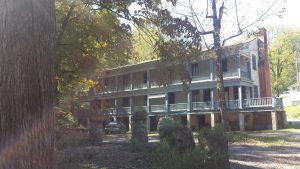 1810 Hotel: This lovely example of early 19th century architecture lords over the property. If you look carefully you will see that this building as been added to, renovated, and repaired many times. There are three stories. Originally this building served as a meeting place and dining facility. The wing was added after the Civil War and is believed to have been brought here from another location. A cement block foundation was added in 1998 to this part of the building. The tin roof dates to the 1930‘s and was installed when the property was leased by Virginia Transient Board(read Depression era hobo camp). Although currently standing empty, the 1810 Hotel would make a lovely tavern. 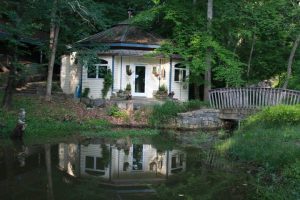 Healing Arts Studio: This decahedron (10 sided) building was completed in 2002. The design is a nod to the Five Element Style of acupuncture practiced by Victoria. It contains two treatment rooms, an office, lobby and bathroom with shower.

Villa: The Villa is a two room guest house built by the Ross family in 2000. The expansive porch is it’s best feature. Currently this united is occupied by long term tenants. 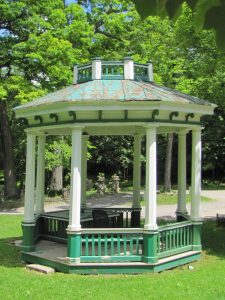 Italianate Gazebo: The gazebo stands over the Yellow Sulphur Spring. It was originally built in 1870 and completely renovated in 1990. The water is cold and mineral rich (lithium, magnesium, selenium, iron, and yes, a bit of sulphur). 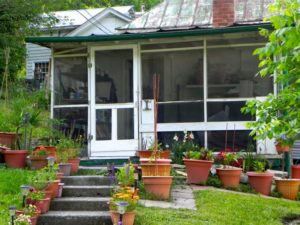 except the Ross family has not lived here since 2005. This is an Italianate structure built in the 1870’s has two bedrooms, living room, and large country kitchen. A cement block addition (c.1955) holds a bathroom and closets.

South Row – the cottage row on the left has you approach the hotel from Yellow Sulphur Road. is one of the oldest structure on the property as evidenced by the round chimneys, probably built in the 1820’s. This building is owned by the Smith siblings who spent there childhood here in the 1950’ and 60’s. The building was gifted to them in 1996. As they live in other states the building is in disrepair. There were two additional buildings along this ridge.

North Row (Tranquility Base) – this eight room cottage row dates to 1840. Our Tranquility manager, Ken Broman, lives, works, and gardens here. He truly has a way with flowers and his garden is worth a visit – with permission.

East Row: the East Row cottage was demolished in 1997 for safety reasons. You can see the foundation site directly across the hollow from the apartment above the fire circle area.

West Row:  this is the building that houses the apartments. It is actually two buildings of 6 rooms each. It was adapted to apartments in the early 1950’s. That is when the bathrooms were added.

Bowling Alley: Originally built in 1898 this outdoor bowling alley was central to the recreational offering of the Yellow during the first quarter of the 20th century. There was a two acres “boating lake” in this area as well. One of the Alley’s most endearing features was the initials, names, and slogans carved into the siding over the years. Unfortunately despite our attempts at restoration Mother Nature won and the bowling alley was demolished by a large tree during a hurricane in 2004. 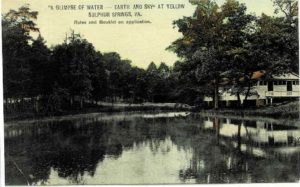 Stone Foundations in the woods, past Tranquility Base, are some stone foundations. As best we know these were practice works used during the 1930’s to train itinerant men in the skills of masonry. The stonework around the “Fairy Circle” dates from this time as well.

“Chimney in the Ditch” This ruin is about all that is left of the grand Victoria style Hotel building built across the creek in 1975. There was an earlier structure at this site as well. 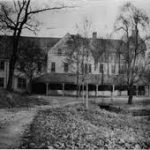 This building had 60 rooms, and a ball room. Old timers remember roller skating in the ballroom as children. The structure was dismantled, for safety reasons, by 1960. Just up the road to the left is the site of the old Carriage House, which burned in 1997. 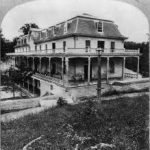 First hotel on this site:

Private Residence top of the hill: This is the home of the Ross family. This Greek Revival house was completed in 2005. It was designed by Virginia architect Gibson Worsham. It is Jeffersonian in style; the rooms are placed strategically around a 18 foot cube complete with skylight. 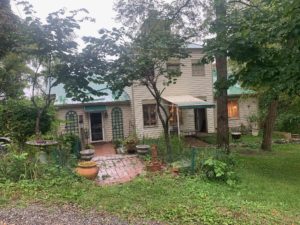 About the Buildings was last modified: November 3rd, 2020 by admin